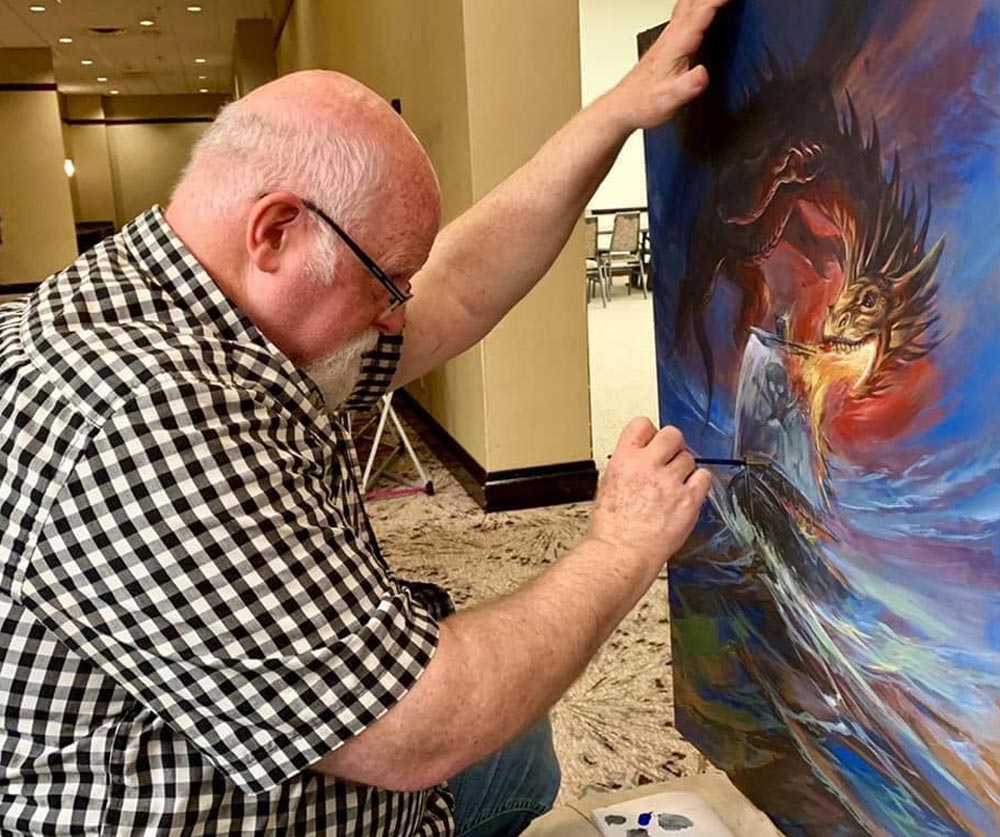 Jeff Easley was born in Nicholasville, Kentucky in 1954. He had an early interest in art, especially when it had a fantastic element. To say he is a huge Frank Frazetta fan is an understatement. He graduated from Murray State University with a BFA degree in painting in 1977.

Easley began his professional carreer as a freelancer, including a few projects with Warren Publishing and Marvel comics. In 1982, he joined the art staff at TSR Inc. which would also include such talents as Larry Elmore, Keith Parkinson, and Clyde Caldwell. Easley's art contributed significantly to the success of TSR's Dungeons and Dragons role playing game in the 1980's and early 1990's.

During his more than two-decade tenure at TSR/Wizards of the Coast, Jeff painted many rulebook, boxed set, and module covers, including iconic Advanced Dungeons and Dragons (AD&D) core rule books. In addition, Jeff was responsible for many famous Dragonlance and Drizzt paintings.

Afer parting ways with WOTC in 2003, Jeff found himself freelancing once again, and is currently producing art for various companies and individuals.

Our prints are made from high resolution scans of Jeff Easley's original artwork.

While working for TSR and its successor, Wizards of the Coast, Jeff painted hundreds of pieces that were used to illustrate a variety of publications. Wizards of the Coast retains the publication rights to most of those images, but Jeff kept possession of his original art. Over time those pieces were sold off to collectors. Several of those collectors have now made their pieces available exculsively to Jeff for scanning into prints.

Our prints are not perfect. The original artwork they represent is often decades old. In too many cases, the art was treated roughly during (and sometimes after) it was used for its original illustrative purposes. Our scans show the pieces as they currently exist, complete with cracks, scratches, discoloration, and other minor imperfections. We hope that you'll agree these age spots give extra character to Jeff's incredible artwork, presenting them as the glorious artifacts that they are.

In addition to our prints, we also have a limited selection of commercially produced lithographs that were printed earlier from master scans that no longer exist. Once these lithographs have sold out, they will not be replaced.

We offer a heartfelt thanks to all who have helped make Jeff's art more widely available to his fans.